Peter Roseney has been titled the greatest legend of Hrimezdice’s Highjump. This now 72 year old diver from Switzerland amazes everybody with his abilities and the difficulty of his jumps. He is one of the few who can finish their jumps head forward even from great heights. We are very much looking forward to welcome Peter again at Highjump  this year so we asked him for a short interview.

I started diving when I was 14 and my mum was not particularly happy about it… At first I was training in Vienna at the Amaliebad pool and in a few months I was the best in my group. I was jumping from a highdiving platform and in half a year I was trying double somersault. But then some health issues occured – I suffered from an ear drum rupture and had to give up highdiving for a couple of months. I became the Austrian champion in the youth category at the age of 17 and at 19 I was the Austrian champion on the 10m platform.

What do you consider your greatest success?

My career peak came in 1974 when I almost passed the limit for the European Championship. But unfortunately, the marks were influenced by a referee who didn’t particularly like me, I think… Anyway, other achievements came afterwards – in 1977 I was the champion of the Bodam Lake region and in 1987 I won the Swiss platform diving Championships. Many times I placed 2nd in the Elite category of platform diving and I placed 1st at lots of senior competitions – jumping from various heights. Since the 90s I had been placing well at the Swiss Cliff Diving Cup in the Maggia valley.

Have you ever had any highdiving idol? Who was that and why?

Luganis and Sautin were the best divers in the world and I was admiring them, of course. But actually I didn’t really think of them as my idols. They were too good for that… But I was definitely inspired by their style. Later on I worked as an official at big highdiving competitions in Austria and there I met Russian and American divers who were showing something unbelievable. I was quite sorry back then that I hadn’t started highdiving earlier…

You are 72 and still actively competing. How do you keep fit and how often do you train?

Yes, it’s true, I still compete and I keep fit! Highdiving motivates me to do some stamina training and I have one other hobby and that’s paragliding. I took up paragliding when I was 66 and I have got much better since. I have quite a low self-preservation instinct and I don’t feel much fear and that has led to several complicated situations and minor crashes. But thanks to the fact that I am keeping myself in a good shape I have quickly recovered from that.

How often do you train jumping in particular?

During winter months I train at least twice a week in a gym and in an indoor pool, of course. With the arrival of summer my training becomes much more varied and I train every other day. I had started jumping from 10m platform again and this year I attended the Swiss Highdiving Championship – they finally introduced the senior category so I was jumping from 16 meters.

Has highdiving changed since the years you started?

Highdiving is more athletic and acrobatic nowadays. In 1977 my most difficult jumps from a 3m platforms were three and a half somersaults forward and two and a half backwards. That wouldn’t be enough even for qualifications at international competitions now. The style of highdiving has been shaped a lot by the Chinese who go through extremely tough trainings.  I am happy that for me jumping has always been fun.

It is Highjump’s 20th anniversary this year – do you remember your first Highjump?

Since 1995 I have attended the event in Maggia Valley (unless I had some injury) and there I also first heard about Highjump. In 2012 my son and I decided to go and see it ourselves and to compete, too. Surprisingly, Curdin Roseney won the 16m competition that year thanks to a dive he had never performed before. I am very excited that I can participate at Highjump – the support of the audience is incredible there.

What’s the first thought you have when you hear „Highjump“?

I am very happy that I can join the party, I love to live this way. It’s true that trainings get more and more difficult every year but I like the challenge! 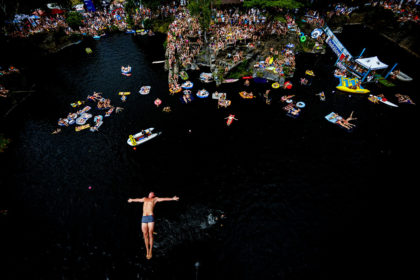 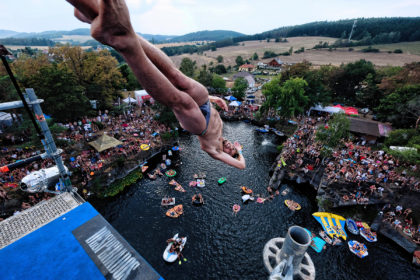 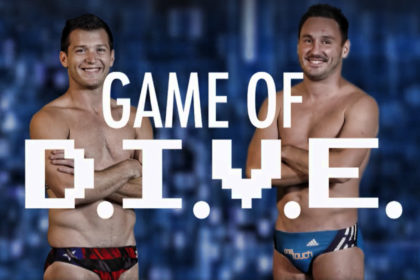